Home » How does ketamine work?

How Does Ketamine Work?

Ketamine works by blocking N-methyl-D-aspartic acid (NMDA) glutamate receptors, activating α-amino-3-hydroxy-5-methyl-4-isoxazole propionic acid (AMPA) glutamate receptors, and suppressing and activating gene and protein expression that have both immediate and long-term psychiatric, neurological, cardiovascular, and analgesic effects. Ketamine’s mechanism of action is complex and has a multitude of effects throughout the human body.

Is ketamine’s antidepressant activity due to NMDA blockade?

Studies suggest that no, the antidepressant activity of ketamine is not due to its NMDA blocking properties. Why? Because other NMDA blockers do not demonstrate antidepressant activity. The low trapping NMDA receptor antagonist lanicemine (AZD6765) has shown promise in early small studies, but failed to reach primary antidepressant endpoints in follow-up. The large clinical trials that used 50mg and 100mg doses were extremely costly, leading to the termination of lanicemine’s development.

Ketamine mechanism of action: immediate effects at the molecular level

Mechanism of action: long-term effects at the molecular level

Ketamine has many long-term effects as well. It suppresses early gene expression at sites of mechanical tissue injury of the following genes zif/268, c-fos, junB, fosB, c-jun, and junD. It also alters the regulation of NMDA receptor phosphorylation and NMDA receptor mRNA expression. Ketamine reduces glial fibrillary acidic protein (GFAP) expression which limits astrocytic and microglial activation. This leads to a reduction in neuropathic pain. It also enhances brain-derived neurotrophic factor (BDNF) and mammalian target of rapamycin (mTOR) protein leading to modification to the number and function of synaptic connections.

Overall, ketamine’s long-term antidepressant effects probably derive from its metabolite action at the AMPA receptor that is somehow tied into its action at the prefrontal cortex. The hypnotic effects are probably caused by a combination of immediate channel blockade of NMDA and HCN1 channels. The more immediate pain-relieving effects of ketamine are probably due to a combination of opioid system sensitisation and aminergic anti-nociception. Whereas its more long-term analgesic effects of inhibition of neuropathic pain relies on a combination of immediate receptor mediated action and initiation of longer lasting cell signalling cascades.

This page reflects ketamine research as of October 2018. We found that some information about ketamine on Wikipedia is outdated. 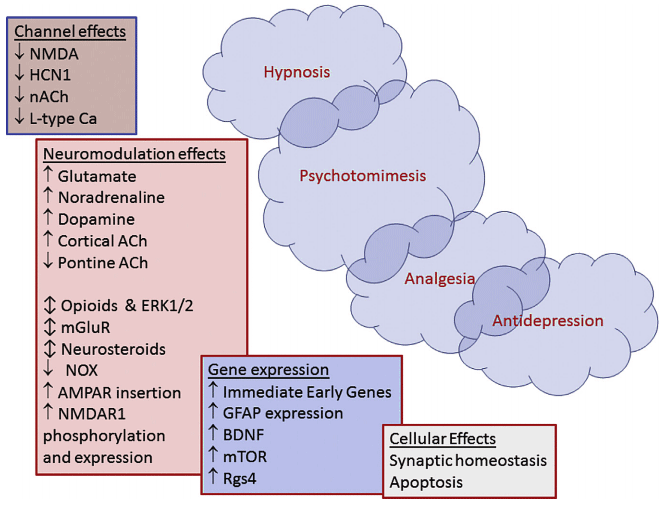